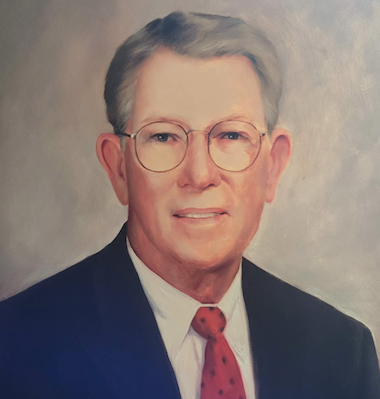 We are saddened to share that Don Dozier, long time ARCO employee and friend to so many, passed away on January 2. Don traveled the world during his 40 year career with ARCO Oil and Gas. At ARCO, he was responsible for all major engineering and construction projects outside the U.S. He also was one of three Project Managers responsible for the design and construction of the oil and gas processing facilities at Prudhoe Bay, Alaska. He was Vice President of Engineering and a member of the Board of ARCO Pipeline Company.

Pat Foster, who was with ARCO from 1970-1994, first met Don working on the Prudhoe Facilities Project in Pasadena. "He turned out to be my boss, mentor, and one of my best friends," said Pat. "I worked for Don in London on the Thames Project; he, Dotty and my wife, Jan, became very close."

Richard Chapman, ARCO, 1974-1999, remembers Don was the consummate great boss and leader.  "Don was patient, an attentive listener, did not get ruffled, ethical, honest, candid, authentic and thoughtful," remembers Richard. "I cannot say enough about his numerous qualities. I enjoyed working for him in both London and in Jakarta.  He was both knowledgeable and experienced in managing major capital projects but perhaps more importantly he excelled in managing people and teams.  He taught me a great deal during our time together and I sincerely hope that I have been able to emulate him in my management style and to pass his wisdom on to the next two generations of leadership. Some of the best advice that Don gave me was unintentional.  After he left Enron but before his political career, Don called me at home late one night and said “Dick, there is only so much golf that a person can play.  Do you have any jobs?”  My take away was not to retire too soon and to have avocations that you enjoy prior to retiring.  Thank you Don.  You will be missed."

Malcolm Corry, who was with ARCO British Limited from 1985-1998 said, "It was an honour to work on Don’s team. The boss, yes, but a real Gentle Man and so kind and considerate. Don led by example; he always listened. ARCO and Don Dozier remain in our memory as being the high point of our career."

Don and Dorothy settled in McKinney, Texas after retirement. He was Mayor of McKinney and made significant contributions to the City during his three terms.

Don is survived by many family members and friends. He has two sons, Mike, New Braunfels, Texas and Brook, Hurst, Texas, and three grandchildren, Taylor, Kaelyn, and Aaron. He also has one great-granddaughter, Kayleigh. He is survived by sisters, Sally Leigh of Terrell, Texas and Karen Lancaster of Temple, Texas and their families, and numerous nieces, nephews, and other loving relatives.

Memorial donations may be made to Alzheimer’s Association and the American Cancer Society in Don’s memory.