Curtis Blount passed away Sunday, May 12. Curtis was living in Houston, where he was a Senior Fellow, Global Wells Technology for ConocoPhillips. He is survived by his wife Shari, his children Chris, Trevor and Sarah and his grandchildren. His obituary can be read here.

Frank Bergren was with Curtis the day he passed away. "Curtis was a close friend since 1980 when we were Electrical Engineering lab partners at UAA. We worked together on projects at Prudhoe and ended up living in the same neighborhood in Katy decades later," said Frank.
"My wife, Sharon, and I were on our 2 mile morning walk this morning when we met Curtis and his dog Cooper. Curtis and Cooper joined us and we walked the remaining mile back to our house and then went to our patio to have a cup of coffee. When I came out with the coffee, I saw that Curtis was obviously in trouble, not moving and unresponsive. I felt for a pulse and could not detect one, so I picked him up out of the chair and laid him on the patio and started CPR. I shouted for Sharon to call 911 and kept doing CPR until the paramedics arrived 10 or 15 minutes later. Shari, Trevor, Sarah and Cliff and Cathy Crabtree joined us at the hospital, where the staff worked on Curtis for about an hour.  The doctor then came out and told us that they never revived his pulse," said Frank.

"Our thoughts and prayers go out to his wife, Shari, and the rest of Curtis’ family. They will certainly miss Curtis as will all of his friends in the oil patch. The world is a different place without Curtis stirring things up. He was an incredibly talented individual and a good man," shared Frank.

The world is a different place without Curtis stirring things up. - Frank Bergren, ARCO 1983-1998

Curtis specialized in advancing technology applied in challenging and harsh environments. He was active in CT and well intervention research and applied technology development for more than 25 years and worked in the industry for 40 years. He coauthored more than 30 technical papers, holds over 20 patents and actively participated on numerous SPE committees. Curtis active participated on numerous SPE committees. He was an SPE Distinguished Lecturer on CT Drilling technology for 2002-2003, SPE Alaska chapter’s Engineer of the Year for 2003, and was SPE’s Drilling and Completion award recipient for 2007.

Mike Haas shares that when he arrived in Anchorage in 1979, he met Curtis during the perforation and testing of the Drill Site 6 wells to raise the field rate from 1.2 to 1.5 MMBOPD. There were two Dresser Atlas polar prowlers on the drill site leap frogging from well to well. "Curtis was this skinny young completion engineer with braces," remembers Mike. "He never slept and was like the Energizer bunny, just running 24 hours a day while I caught cat naps sleeping in the truck. I will never forget those days and how he was so full of energy and zest for life. I understand why his career was so successful because of that great attitude," said Mike. Mike was fortunate to catch up with Curtis a couple years ago when Curtis was in Dharain. "I was lucky to see him again and reminisce about the old days," said Mike.

Denise Ganopole worked with Curtis before he transferred to Houston. "It was a privilege and delight to work with Curtis.  A very smart and dedicated man, with a great sense of humor.  I could never walk away from an encounter without a smile on my face," said Denise.

Michael Mooney shares that he and Curtis met when Michael was fresh out of college as a roustabout in 1983 and Curtis was a Wireline Supervisor. “He loved to tell the story of our first time working together in Prudhoe,” shared Michael. “On my first job, he told me to go up on the wellhead tree and close a valve, so I scrambled up and turned it the wrong way – “hey kid, righty tighty, lefty loosey” he laughingly yelled which kept him off my BFF list that day. After some time, I began to recognize that this guy was really smart, and I was going to learn from him. We ended up working together over the years and that close work relationship turned into a great friendship.” 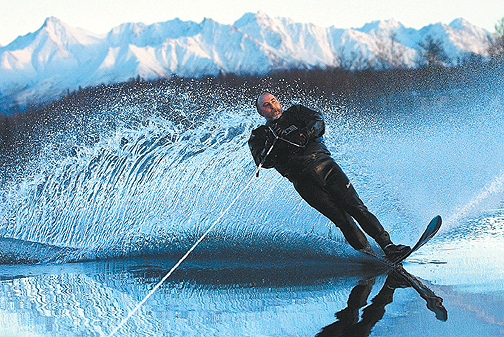 At work, Michael recalls that Curt was often the go-to guy for the big challenges and well/downhole knowledge. He always amazed Michael with his impact and dedication to the industry. “Everywhere we traveled he was a super star with his unique presentations, his story telling, generosity and natural talent at keeping all entertained,” remembers Michael.
“Reflecting back over the past 36 years, we did a lot together such as rock-climbing classes, multiple water ski camps in Washington, camping, fishing, white water rafting (Curt went swimming that day), hiking, global work travels and endless days water skiing on Wasilla Lake. Some days we would just hang out and try to solve the world’s problems. We were very compatible at golfing and both agreed once was enough.
Known as Uncle Curt to my boys, our families were close and watched each other’s kids grow up. We had many excellent meals and fun times at Curt and Shari’s homes in Alaska and Texas. There might have been a few times that Shari had to put up with shenanigans from Curt and myself.
I always told Curt he knew how to live each day to the fullest extent. He will be sorely missed by many people and certainly our family,” said Michael.

Michael 'Mick' Kraly, said "This is a sad, sad day with wonderful memories of Curtis back in Prudhoe when I was a roustabout and he was the Wireline Supervisor. I cannot think of a time when Curtis didn’t have a smile on his face. He loved what he was doing. It makes us all thankful for each day we have to enjoy life!" said Mick.

Read 2719 times
Tweet
More in this category: « May 22 Memorial Service for Curtis Blount Where are they now: member updates »