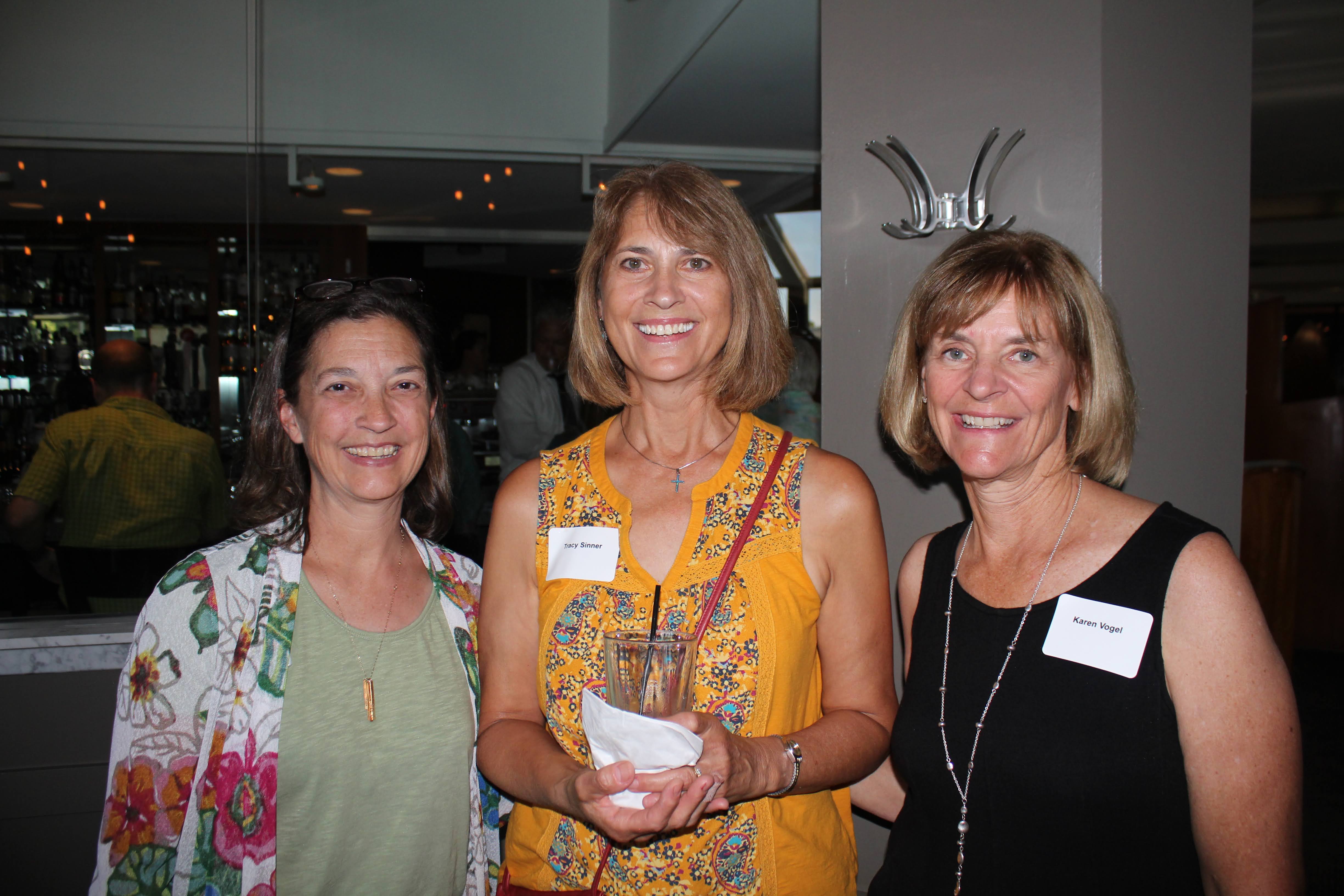 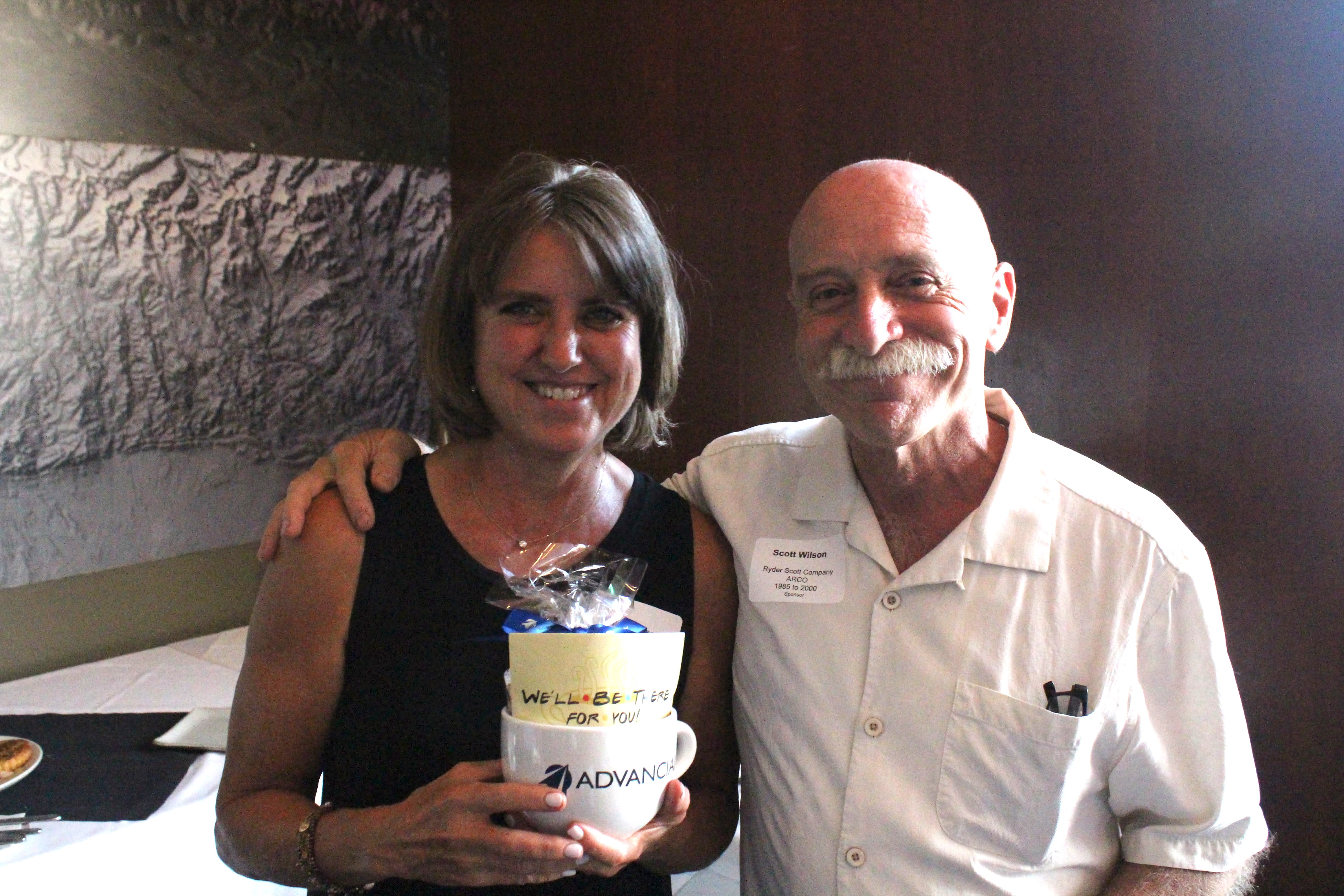 We had a number of couples at the happy hour including Scott and Mary Wilson. We were thrilled they joined us on the day they were celebrating 36 years of marriage. Bob Schutzius had celebrated his 40th wedding anniversary earlier in the summer. Congratulations!

Others attending included Steve and Cynthia Enger, Mark and Maria Pearson and their daughter Victoria, Tracy and Joe Sinner, Stacy and Watty Strickland, Deidre and Paul Taylor, Herb and Karen Vogel, Becky Watson and Clay Borden, Tom and Jewel Wellborn and Cathy and Mike Clonts. Steve and Cynthia Enger are retired and busy traveling after they relocated from Denver to Golden.

Herb Vogel joined SM Energy in Denver in 2019 and assumed the role of President and CEO in November 2020. Herb continues to scale 14ers with his son and nephew in his spare time.

Scott Wilson is a Partner at Ryder Scott where he specializes in reserves evaluations, artificial lift optimization and supporting clients as they maximize the value of their fields. Scott continues to ski, organize 'the guys annual ski trip', kayak and create new inventions and yard art.

Joanne Cech and Bob Schutzius drove from Fort Collins where Joanne is working for the City as a Program Evaluation Senior Analyst. Bob shared that he celebrated 40 years of marriage this year and chaired his high school’s 45th class reunion.

Tom Walker joined Occidental in Denver in November, 2018 and is the Chief Production Engineer responsible for keeping thousands of wells running and testing new technologies.

New members Kim Pentoyer, Rebecca Rice and Jewel and Tom Wellborn were at the happy hour courtesy of Tom Linn who promoted the happy hour to the ARCO Coal alumni. Rebecca is with Kinross Gold USA and was with ARCO Coal from 1981 to 1988. Tom continues to dabble in consulting, and decided to attend the happy hour when he saw the pictures from the Anchorage event. Jewel is working for Hydrocarbon Exploration and Development. Tom Linn was unable to attend as he was caring for his wife who had knee surgery.

Joe Sinner retired in 2022, and has yet to decide whether he will consult or continue to enjoy golf, hiking and many other activities keeping him busy. He and Tracy are also busy travelling for weddings and family. 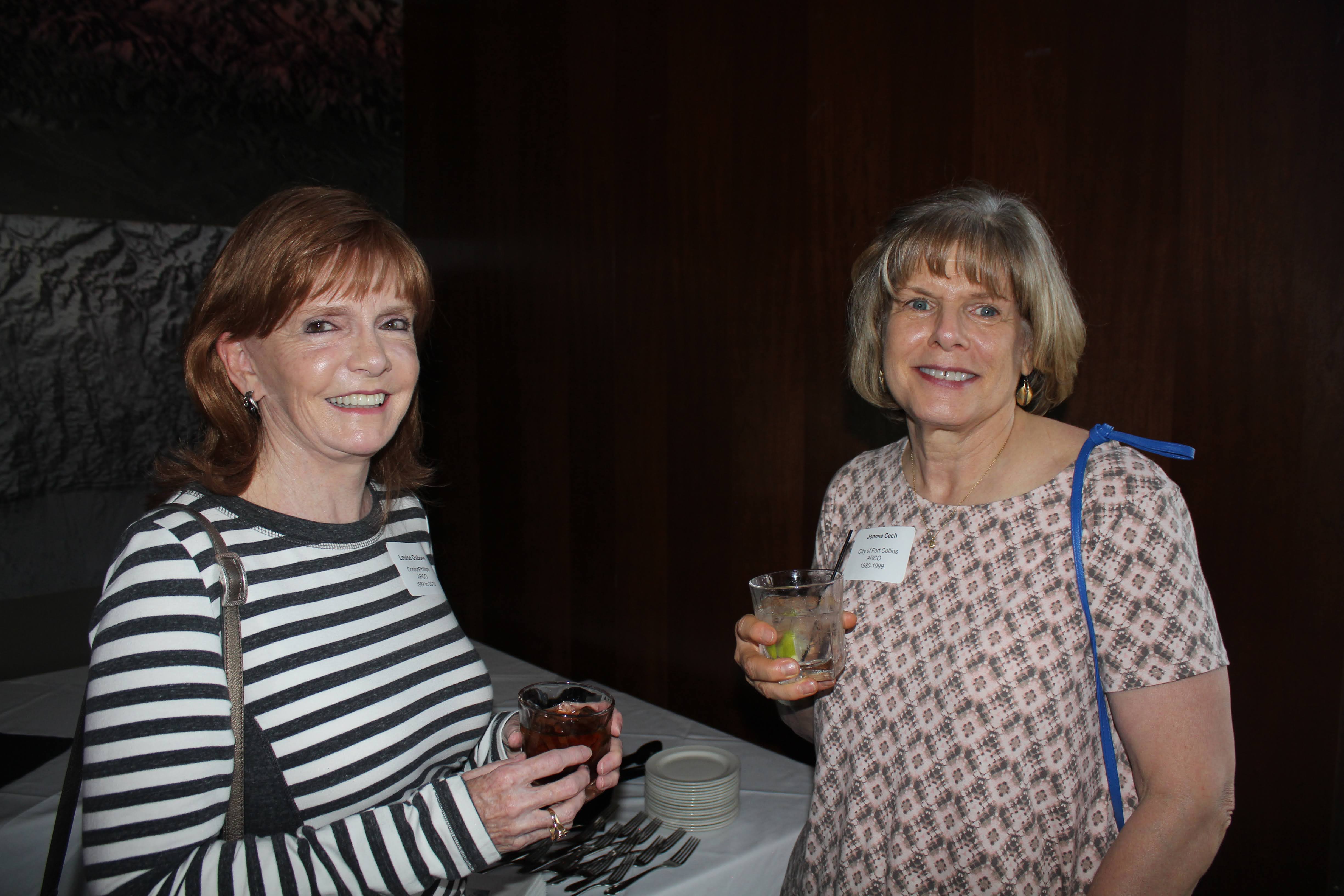 George Fenati shared that he and Watty Strickland are volunteering with Healing Waters International. The organization builds compact water treatment systems that bring safe drinking water to at-risk communities, mainly in Central America and Africa. “Our tasks mainly involve assembling, labeling, and packaging the units for delivery to their final destination,” said George. “ There, a local distributor sets up commercial terms and training for the purification units with needy communities for radically affordable drinking water. The commercial terms significantly improve the likelihood that the units will be functionally maintained and not forgotten in a back corner of a warehouse at the first sign of operational issues.”

Watty arrived back from Anchorage the day before the happy hour. He and Stacy were in Anchorage celebrating a nephew's wedding and visiting friends. Watty drove his daughter's trailer back to Denver with Doug Swenson, stopping to fish along the way.

Victoria Pearson enjoyed creating some artwork which we used to display the Advancial giveaways!

Louise Osborn holds the distinction of being the only other person than Cathy Clonts who was at the Anchorage and the Denver gatherings.

We were sorry to miss the following individuals. Greg Ernster was in Alaska on vacation, Kelli Nadon was packing for a move from Denver to Anchorage, Gordon Pospisil was on vacation in India, Connie and Winston Shero could not attend and Win said “It would have been nice to catch up with Mike (Clonts) since we worked together on the REB subsurface team in Plano”. Melanie Wstergaard was traveling in France for six weeks.

RSVP for you and a guest here

If you were at the happy hour on July 21 at O'Malley's, you know we enjoyed a great time and record turnout. Log on to see all of the pictures.

John and Kristina Hentges retired and have stayed in Anchorage. Both of their adult children are working in the industry in Anchorage. Life is good! Frank and Anca Paskvan are enjoying summer and camping on the weekends; the Digers were unable to make it as they were away camping. Mark and Gina Ireland also are blessed to have their children - and grandchild - living and working in Anchorage.

Louise Osborn, Kirk Barker and Russ Bone were in town from Colorado, Washington and Oklahoma respectively.After 19 years working for ARCO in Plano, primarily supporting Alaska gas injection projects, Russ Bone went to work for Phillips 66 (now ConocoPhillips) at their research labs in Bartlesville. Russ is mentoring the next generation at COP, especially about PVT and gas injection.  As luck would have it, he was teaching an EOR school at the same time as the Anchorage alumni event. Russ enjoyed seeing some familiar faces.

Ken and Pat Thompson, Russ Doig, Linda Petrie, James and Sandi Posey, Chip and Georganna Derrick, and Paula Harris were some of the many guests at the Anchorage Networking Happy Hour Thursday, July 21. Santos was represented by Bruce Dingeman and Mark Ireland; COP employees included Emily Arrowsmith, Jed Chamberlain, Barbara and Mike Hurley, Eric Pierson, and our sponsor PRA was represented by Tom and Chantal Walsh and Patricia Lobel. Ken and Pat Thompson also attended and cosponsored the happy hour. 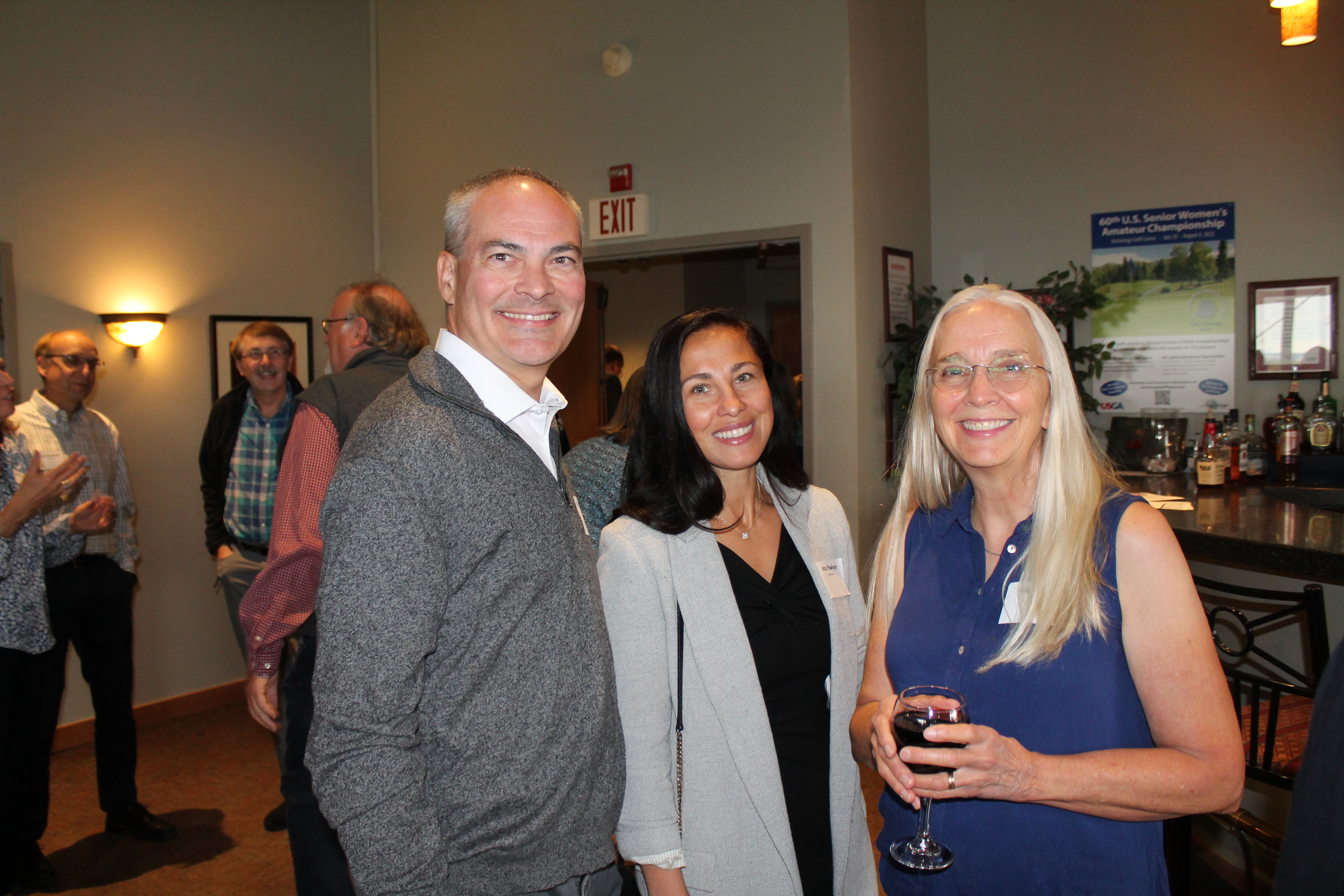 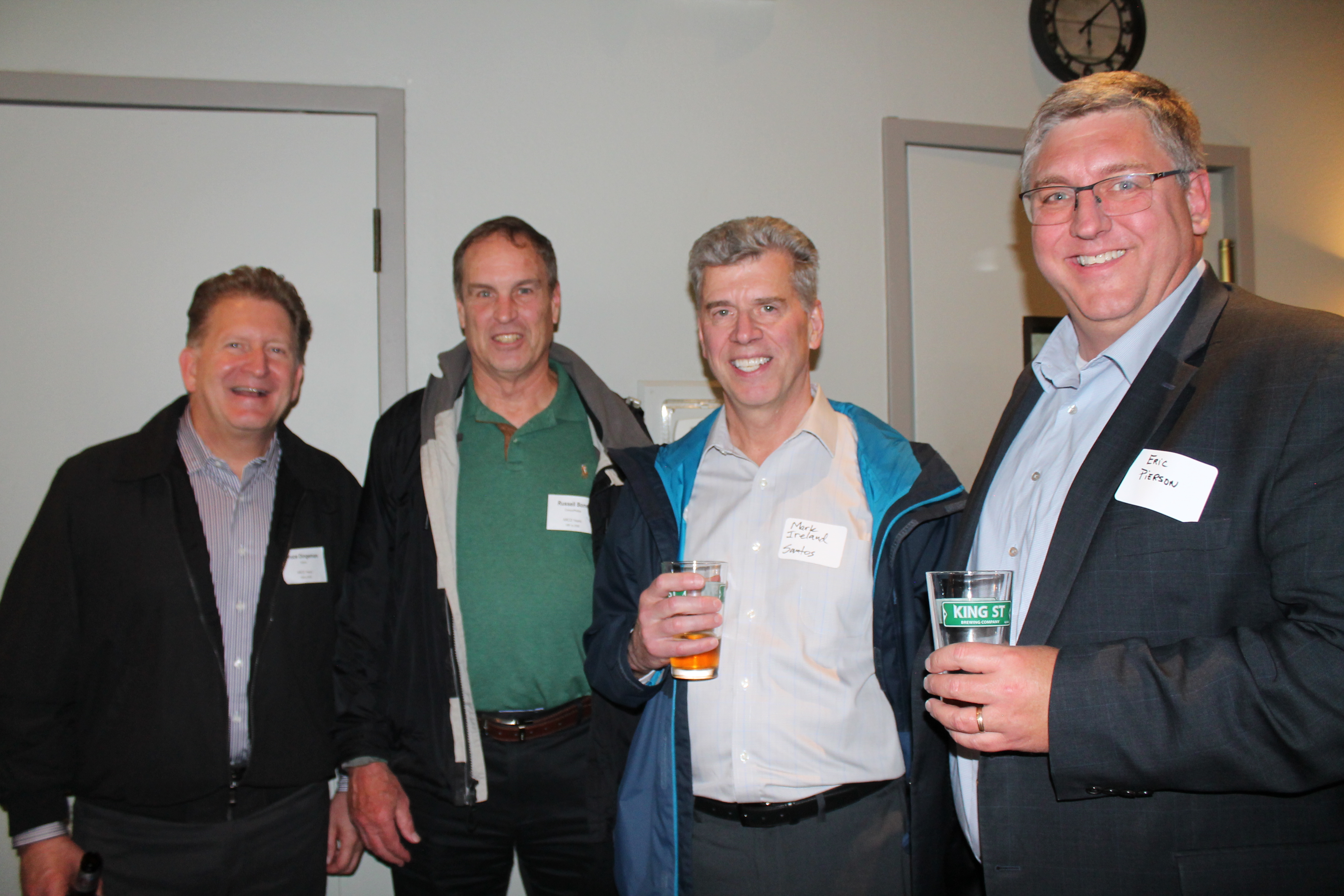 A special thank you to our sponsors, Advancial, ACS, Pacific Star Energy and PRA who made this event possible.

Amanda from Advancial, Susie Holly, Becky Stoabs, Kathy Gray and Katie Parmelee were essential in helping pull apart the adhesives from the very challenging name tags and welcoming the crowd to our event. It was our pleasure to include Shelly from the Food Bank of Alaska. Thank you to everyone who made a donation. Shelly was grateful not to have to carry a heavy load of canned goods back to their new location. If you want to make a donation, or volunteer, visit their website.

Advancial Federal Credit Union, with whom many ARCO Alumni continue their long relationship, has opened a new branch on 36th Street in midtown Anchorage. This new branch, designed with the Advancial colors, is bright and welcoming. Whether you visit the branch for some financial services, to say hello, or because you are interested in job opportunities, they invite you to stop in.

Amanda joined us at the recent Energy Alumni event at O'Malley's on July 21 and we thank her and Advancial for their support and services. Many alumni have been Advancial members for up to 35 years. 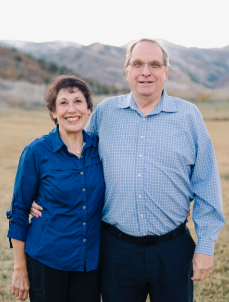 After high school, Jim attended Brigham Young University in Provo, Utah, prior to serving a 2 ½ year mission in Taiwan for The Church of Jesus Christ of Latter–day Saints. On that mission he learned to read and write Mandarin Chinese, the study of which became a lifelong avocation. After his mission, Jim returned to BYU in 1971, where he met and married his eternal love and companion, Kimberly Wilde Higbee. They were sealed in the Los Angeles Temple on November 22, 1972.

Jim graduated from BYU in 1972 and earned his law degree and an MBA at the University of Washington, but his education never ended. Jim was a lifelong researcher, and learner. Jim’s law review article changed insurance law in three states by the time Jim was 30 years old. After graduation, Jim joined a law firm, but, feeling the lure of international business, joined the oil and gas company, ARCO, for whom he traveled the world negotiating international oil and gas joint ventures. As part of his work, the family lived in California, New Zealand, Texas, Kazakhstan, China, and the Philippines, where precious memories and lifelong friendships were made.

Jim retired in 2017, and in 2020, Jim and Kim settled in Draper, Utah, in a home with an unobstructed view of the mountains he always loved—Mount Timpanogos and the Wasatch Range—the outdoors where he loved to be. Jim is survived by his wife, Kimberly, their four children, nine grandchildren, his brother, Glen, and his sister, Jean.

Jim wrote a book of negotiation principles, each prefaced by a Chinese proverb or chengyu. One of Jim’s favorites was The Old Man Who Lost His Horse. The proverb begins with an old man losing his horse. All the villagers say, “How unfortunate!” The old man replies, “Perhaps.” Then some months later, the horse returns with a mate, and the old man has two horses. The old man’s only son rides the new horse and is thrown and breaks his leg, making him a cripple for a time. All the villagers say, “How unfortunate!” The old man replies, “Perhaps.” War then comes to China, and all able–bodied men are called to the front, where most die in battle. But due to the broken leg, the son remains safe at home with his father. The moral of the story is that sometimes things that appear to be unfortunate are indeed a blessing. This is how we feel about Jim’s passing, for we know that we will be reunited again, and until that time, he will be faithfully at his patriarchal post, loving, guiding, and protecting all of us, his family.

Funeral services will be held Saturday, July 9, 2022 at 11:00 am in the Eagle Crest Second Ward Chapel, 14919 South Eagle Crest Drive, Draper, Utah where family and friends may attend a viewing from 10:00 – 10:45 am prior to the services. Interment will be in the Lindon City Cemetery. Condolences may be sent to the family at www.olpinmortuary.com.